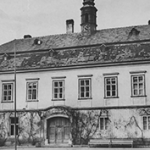 Brochure of acitivities in 2017

The Association of Chateau Liteň organized Jarmila Novotná Festival 2017 already for the sixth time. The connecting line for all its activities was  that was celebrated on September 23, 2017.

The most important event of the festival – the gala concert Tribute to Jarmila Novotná 2017 was held on September 25, 2017, thanks to the cooperation with the Czech and international opera stars and Prague Radio Symphony Orchestra. Singers such as Adam Plachetka, Aleš Briscein, Adriana Kohútková, Daniella Fally, and Nina Tarandek participated. The orchestra played under the baton of Ondrej Lenárd and the sold out evening was hosted by a famous Czech moderator Marek Eben.

The fourth singing courses happened during this festival as well specialized on the worldwide either Czech repertoire. These courses were led by Kateřina Kněžíková and Adam Plachetka during August 9–13, 2017 and ended up traditionally – by the Final Concert of the Course Graduates and their lecturers held on August 13, 2017, in Liteň. The first run of the courses took place on March 25 – 26, 2017 at the Music and Dance Faculty of the Academy of Performing Arts in Prague organized already for the third time.

The sixth season of the festival also offered the Touring Exhibition about the Life of Jarmila Novotná under the title Jarmila Novotná: Opera Diva. It was opened from March 30 to May 28, 2017 in a Mythological Corridor of Wallenstein Palace (Senate Parliament of the Czech Republic).