Jarmila Novotná made her first film appearance shortly before becoming a National Theatre soloist in Prague. She was given the major role of Countess Jacinta in the film Vyznavači slunce (Sun Lovers) in 1925. The film marked a return of Václav Binovec at the Czech filmmaking industry. He supported the nascent industry very actively in 1918-1923. Binovec’s company WeTeB produced 25 films during this famous period, giving rising stars Marville and Vladirimov plenty of opportunity to shine. However, Binovec broke up with the two, tarnishing his contribution to Czech filmmaking. Engaging the 18-year-old Jarmila Novotná can be interpreted as Binovec’s attempt to find a new attractive star. In the same spirit, Binovec worked with Růžena Hofmanová in Irča v hnízdečku (Irene in a nest, 1926), his last film made in the 20’s. He had to wait until the late 30’s and early 40’s to find his new star, Zdenka Sulanová. 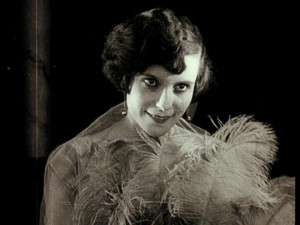 One can infer from Jarmila Novotná’s memoires that film did not mean as much to her as singing. She had no particular motivation to build on her debut in Czech silent film. However, as a singer with the Berlin State Opera, she saw the arrival of the sound era, and was given a chance to sing in the  theatre rehearsal scene in Carl Frölich’s Brand in der Oper (Fire in the Opera House, 1930). The following year, she appeared in Victor Janson’s Der Bettelstudent (The Begging Student, 1931). She also played in the first German film opera, Die verkaufte Braut (The Bartered Bride, 1932)directed by Max Ophüls to music by Bedřich Smetana. However, the production aroused anti-German sentiments in Czechoslovakia, and the film was never distributed there.  Her last German film, Die Nacht der großen Liebe (1933) was a musical melodrama set in exotic locations, with Gustav Fröhlich as her partner.  In a unique opportunity to get Novotná for a Czech sound film, Svatopluk Innermann offered her the role of singer Maja Zemanova in Skřivánčí píseň (Song of a Lark, 1933). In Austria, she starred in Karel Lamač’s Frasquita (1934) and in Phil Jutzi’s Der Kosak und die Nachtigall (1935). Between the two, she appeared in Leo Mittler’s French and English versions of La dernière valse (The Last Waltz, 1935), shot in Paris and premiered only after Novotná’s decision to discontinue her acting career and to turn down, repeatedly, offers from Hollywood film-makers.

The Second World War changed many things. Novotná had become a highly successful and sought after star at the Metropolitan Opera in New York. She made her first Hollywood film only after director Fred Zinnemann’s personal visit to Liteň. The story of a mother searching for her son after the war spoke to Jarmila and her husband, and even to Jan Masaryk. The Search (1948) earned an Oscar for the screenwriters Richard Schweizer and David Wechsler, and an Oscar for Ivan Jandl for the role of Jarmila Novotná’s son. She had only one more feature film appearance after The Search.  A 70 mm biographical film in color, The Great Caruso (1951) won an Oscar for the best sound recording by Douglas Shearer. From time to time, Novotná appeared in a TV talk show or program including Toast of the Town (1949), Four Star Revue, The Colgate Comedy Hour (both 1951), Omnibus and Studio One (both 1953). She also appeared in TV plays. The Great Waltz (1955) by Max Liebman was a biography of Johann Strauss Jr., and Hans Brinker and the Silver Skates (1958) by Sidney Lumet was a fairy tale with Olympic figure skater Dick Button.

After 1956 when Jarmila Novotná ended her career at New York’s Metropolitan Opera, she appeared in one more TV play and then retired. Her name appeared again in connection with documents on Reinhardt and Toscanini. In 1986, she appeared as a guest during the interval of Die Fledermaus aired Live From the Metropolitan Opera. Still before the World War II, she was featured in several shots made in Czechoslovakia including a contribution to the cycle Galerie osobností (Gallery of Personalities).  Her next TV appearance in her home country dates to 1989: Petr Ruttner made two documents on her, Jarmila Novotná (1989) and Vox humana (1990). The last time she appeared on the screen during her lifetime was in 1991 in the cycle Album. After her death, Jarmila Novotná was remembered by the creators of the programs Hledání ztraceného času (In Search of Lost Time, 1997), Hudební toulky s Ladislavem Smoljakem (Ladislav Smoljak’s Musical Wanderings, 2003) and Domácí štěstí (Domestic Happiness, 2005). Petr Skala made a documentary on Novotná, Nepolapitelný motýl (An Elusive Butterfly) in 2002. Most recently, Jarmila Novotná and her career were remembered on TV during the compilation night entitled Večer na téma… pocta Jarmile Novotné (The Evening of… Paying Tribute to Jarmila Novotná), during which the last Jarmila Novotná documentary, Jaroslav Soukup’s Vzpomínka na Jarmilu Novotnou (Remembering Jarmila Novotná, 2007) was premiered.